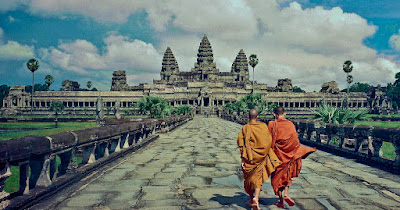 Comment : There are few places anywhere on earth to match the splendor of Angkor Wat that is one of the largest monuments to religion ever built and is truly one the wonders of the world.

Believed to have been constructed as a temple and mausoleum for King Suryavarman II at the peak of the Khmer empire in the first half of the 12th century, Angkor Wat is probably the best-preserved of the Angkorean temples. As with other Angkorean temples and walled cities such as Angkor Thom, the central theme of Khmer architecture revolved around the idea of the temple-mountain. By the time building on Angkor Wat was begun early in the 12th century, this had been elaborated to a central tower surrounded by four smaller towers. The central monument represents the mythical Mount Meru, the holy mountain at the centre of the universe, which was home to the Hindu god Vishnu. The five towers symbolise Mount Meru's five peaks.

It is difficult to express in words the enormous scale of Angkor Wat, but it can be explained in part by a look at the dimensions of the complex. The temple is surrounded by a moat which makes the one around the Tower of London, built at roughly the same time, look like nothing more than a garden trench. At 190 metres wide and forming a rectangle measuring 1.5 km by 1.3 km, it is hard to imagine any attacking force overwhelming the defences. But the moat was more than just a defensive bulwark, in line with the temple's Hindu origins it represented the oceans of the world. A rectangular wall measuring 1025 metres by 800 metres borders the inner edge of the moat.

There is a gate in each side of the wall, but unusually for the mainly Hindu-influenced Angkorian temples, the main entrance faces west. This entrance is a richly decorated portico, 235 m wide with three gates. However, the temple's greatest sculptural treasure is its 2 km-long bas-reliefs around the walls of the outer gallery and the hundred figures of devatas and apsaras. This intricately carved gallery tells stories of the god Vishnu and of Suryavarman II's successes on the battlefield. The whole complex covers 81 hectares.

P.S: If you want to visit Angkor Wat temple, don't forget to bring a long a nice camera to capture the beautiful view of this wonder like we are in the haven. And if you want to shoot photo of the whole temple you need to have a nice drone camera to shoot from the top of temple that has 213 meters height. And when you have a nice drone camera you can capture a beautiful area around the temple and the other temples around there as well. If you don't have one we recommend you to choose one from this site: https://10techy.com/best-drone-cameras/. I'm sure you will love all the pictures from your drone camera. Let see the example image below. 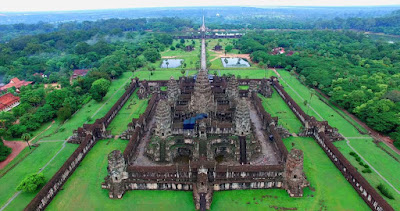 Constructed : Late 12th/Early 13th century
Religion: Buddhism
Style : Bayon
King : Jayavarman VII ★ 1181 - 1218 ★
Location : Just to 1.7 km in the North of Angkor Wat, a gigantic unit that one cannot miss, would not be this that because of the gate of entry and the bridge which precedes it. In the order, Angkor Wat, Ta Phrom Kel, Phnom Bakheng, Baksei Chamkrong, Prasat Bei and South Gate of Angkor Thom. 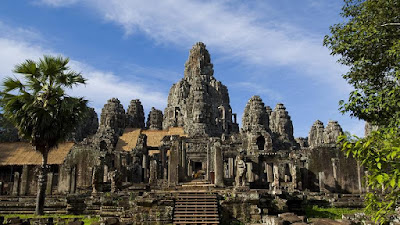 Comment : Angkor Thom (large Angkor ) is a royal city of 10 Km² surrounded by walls and ditches. There still, a book would not be enough to describe all the richness of this unit. The tourists in a hurry will cross the site in less than one hour, but those which are interested a little in this style of construction can largely envisage a half day on the spot! When Jayavarman VII started the construction of Large Angkor, Baphuon and Phimeanakas existed already but had been devastated by Chams.

Five majestic doors, whose stones sometimes mix with the roots of splendid trees, crowned giant heads, decorate the four cardinal points of the city and the access road to the Royal Palace. The construction of Large Angkor was the celebration of a victory (from where probably the door of this name) for Jayavarman VII after it drove out the Cham enemy at the end of the 12° century.
Angkor Thom is enormous temple which is protected in the rampart and the ring moat. As for the rampart around to be made accurately with the laterite, height approximately 8 meters. As for ring moat around 100 meters in width, as for depth 5 or 6 meters. Angkor Thom the north east which keeps reducing altitude - is located with respect to pivot southwest. Because of that, north east angle to be high southwest angle is low. The vertical separation presently approximately 10 meters. It took in the water of the ring moat from north east angle making use of this vertical separation, inside the castle flowed and accumulated in Angkor Thom in southwest angle, from here was discharged in the ring moat.

There is a Bayon temple on the Angkor thom center. You say that there were five ports, there was a door of the wood product in those and was closed in the night. There being a court of the woodwork inside, the king lived, in addition was a many temple and a reservoir. By the way, Angkor Thom (big capital) with being afterwards, it is the name which is accustomed.
at August 07, 2010 1 comment: 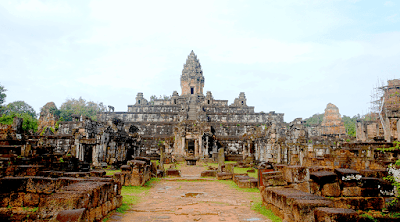 Comment : They are first ones as the large-sized mountain type temple which was made with the sandstone in the process of evolution of the temple construction in Angkor period. Also the constitution where you can feel the central hall small lightly the stylobate (especially) in comparison with heavy appearance more, it probably will be considered as one process of evolution. View helix from near the central hall it seems, calls the artificial mountain it is suitable.

The ring moat of Bankong, presently being covered in the grass, has become like the swamp land. The ring moat was possible with the laterite, there was a stairway which it is possible with the sandstone which lap it is low is surrounded in the wall, in addition descends to underwater, but the part of that remains on east side participating road both sides. Lap there is a wall in the place which crosses the ring moat, furthermore lap there is a wall mark even in the inner part. In the halfway right side the Buddhism temple, is elementary school in the left hand. Foreward reaching to the stylobate section, the building which it is possible to left and right, with the sandstone systematically has lined up.

Furthermore when it advances, in the front the stylobate of five layer which is heavy-looking increases in pyramid type, the central hall of thinness one stands on that. In order from under and under one of the first section for the tower hall whose 12 is small to surround the central hall in fourth layer, it is arranged.

Among these it seems that the hall which remains on south side state is best. Also verifying the extent of such temple limits, probably will be useful to the scale of Bakong and knowing constitution.
at August 07, 2010 7 comments:

Email ThisBlogThis!Share to TwitterShare to FacebookShare to Pinterest
Labels: Bakong 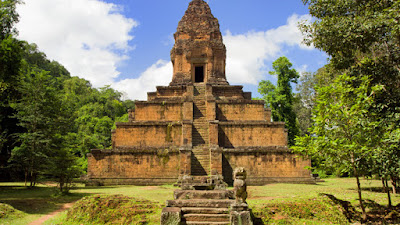 Description : Baksei Chamkrong is a 12-meter tall brick and laterite pyramid. Combine with a visit to the South Gate and Phnom Bakheng. Lighting is best in the morning. Harshavarman I began construction or perhaps dedicated statues at the site. The temple was later improved/restored by Rajendravarman II shortly after the capital was returned to Angkor from Koh Ker. According to inscriptions on the doorway Rajendravarman consecrated the temple with the installation of golden Shiva image in 947AD. It may have also served as funerary temple.
at August 07, 2010 No comments:

Constructed : Late 12th century
Religion: Mahayana Buddhism
Style : Bayon
King : Jayavarman VII ★ 1181 - 1218 ★
Location : 23Km from Sisophon and to the north-west of Angkor, this was one of the capitals of Jayavarman II. It was rebuilt during the reign of king Jayavarman VII and dedicated to his son, who was killed in battle. 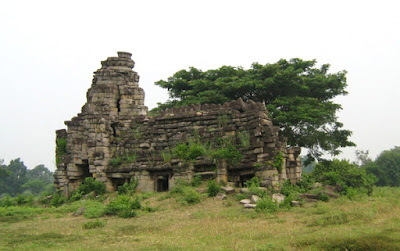 Comment : Banteay Chhmar is not popular to tourists but very interesting temple located near by Thai border. Temple itself is mostly destroyed and Lost almost all of it's devatas and other bas-reliefs but some good curvings are still on the wall of galleries and gopuras.

Banteay Chhmar is the enormous plane surface development temple of the Bayon style. East west 800 meter north and south 600 meters. Inside the ruins collapse is terrible, but you can see the motif which is similar to the Bayon in the relief which barely remains.

Temple Detail : The temple complex of Banteay Chhmar was constructed by Jayavarman VII. There is debate over its origins, with some scholars suggesting it was built in tribute to Jayavarman VII’s son Indravarman and the Cambodian generals responsible for defeating the Chams, while others propose it was intended as a funerary temple for the king’s grandmother.

Originally enclosed by a 9km-long wall, the temple housed one of the largest and most impressive Buddhist monasteries of the Angkorian period. Today, it is one of the few temples to feature the enigmatic, Bayon-style visages of Avalokiteshvara, with their mysterious - and world famous - smiles. On the temple’s east side, a huge bas-relief on a partly-toppled wall dramatically depicts naval warfare between the Khmers (on the left) and the Chams (on the right), with the dead - some being devoured by crocodiles - at the bottom. Further south (to the left) are scenes of land warfare with infantry and elephants. There are more martial bas-reliefs along the exterior of the temple’s south walls.

The once-grand entry gallery is now a jumble of fallen sandstone blocks, though elsewhere a few intersecting galleries have withstood the ravages of time, as have some almost-hidden 12th-century inscriptions. All the remaining apsaras (nymphs) have been decapitated by looters. Banteay Chhmar was deservedly renowned for its intricate carvings, including scenes of daily life in the Angkorian period similar to those at Bayon.

Unique to Banteay Chhmar was a sequence of eight multi-armed Avalokiteshvaras on the outside of the southern section of the temple’s western ramparts, but six of these were hacked out and trucked into Thailand in a brazen act of looting in 1998. Still, the two that remain - one with 22 arms, the other with 32 - are spectacular.
at August 07, 2010 No comments:

Constructed : Mid 10 th century - ???-960
Religion : Buddhism
Style : Pre Rup
King : Rajendravarman II ★ 944 - 968 ★
Location : At the end of the road of the circuits, between Banteay Kdei and Prasat Kravan, at the end of a road of a few hundreds of meters, on the left, little bit away from the road. 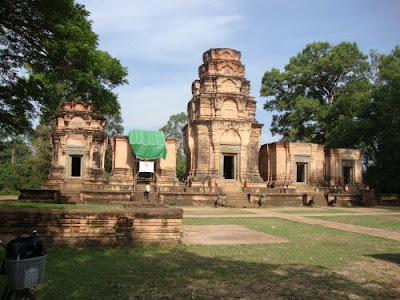 Comment : The small road which passes through rice plantations is very pleasant, especially with the lighting of end of day. One arrives then on three small brick towers under restoration but of which large-thing should not be awaited. The surprise comes from this built Buddhist temple in the 10 century, whereas the Hinduism was still very present among Khmers.
at July 15, 2010 No comments: 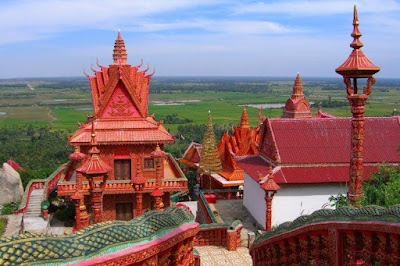 Comment : Ba Phnom is the place where it assumes that there was a king capital Vyadapura. But whether or not really capital existed is here, as for those which become evidence there is no at all. It has several tops, there being a low hill, there is a Buddhism temple in the top vicinity. The road which from the hill extends to the straight line on north probably at one time kingcraft.
at July 11, 2010 4 comments: